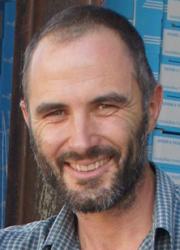 Sam Statham is an organic farmer and winemaker at Rosnay Organic, father of three, and has been an active member of the organic industry for over 20 years. Sam's family moved to Canowindra, in the NSW Central West, in 1996, became certified organic in 1998, and today they grow wine grapes (20ha), olives (10ha) and figs (½ha) for domestic and export markets. The farm, “Rosnay”, is part of a group of organic growers called Rivers Road Organic Farms, set up in 1998.

Sam is an outspoken proponent of organic farming and winemaking, and also of good corporate governance, transparency, consultation and democratic processes, especially with regards to maintaining Australia's organic standards, the corporatisation of organics and the responsible regulation of GMOs.